With the above CSP policy, images can be loaded from the same origin (via the 'self' source list value), or via URLs starting with: https://images.example.com

The above policy will block any image not same origin or via https://images.example.com, so the following would be blocked by CSP:

What does 'img-src' was not explicitly set mean?

refused to load the image because it violates the following content security policy directive: "default-src 'none'". note that 'img-src' was not explicitly set, so 'default-src' is used as a fallback.

refused to load the image 'http://localhost:8080/favicon.ico' because it violates the following content security policy directive: "default-src 'none'". note that 'img-src' was not explicitly set, so 'default-src' is used as a fallback.

The CSP img-src directive has been part of the Content Security Policy Specification since the first version of it (CSP Level 1).

Internet Explorer 11 and below do not support the CSP img-src directive. This means that IE11 will simply ignore the policy and allow images to load from anywhere (as if a policy had not been set at all). 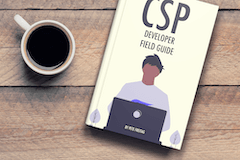